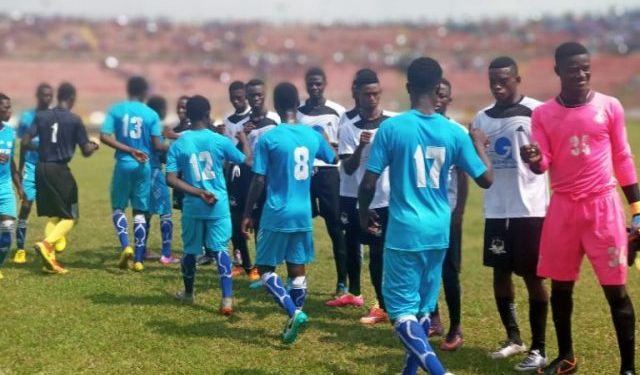 Kumasi Armed Forces SHS and Mpasatia Sec/Tech have been told to play a playoff match at the Kumasi Baba Yara Sports Stadium early in the morning on the day the main tournament will start before the commencement of the tourney.

The winner will be part of the 32 schools. The Draw which is yet to be done will determine the winner’s opponent.

Aduman SHS, on the other hand, has gained the slot they earlier had during the qualification after appealing the ruling (decision) of the Disciplinary Committee last week.

The Disciplinary Committee of the Schools Federation headed by Mr. Suleiman Zacharia Yeboah, Headmaster of Islamic SHS ruled in favor of Tweneboah Kodua SHS who protested against Aduman SHS who were eventual winners of their group over the eligibility of Aduman SHS Player.

The player in question (Majeed Abubakar) who was subject to the protest has been banned from taking part in any School Sporting Activities but Aduman SHS who used the player has been ordered by the Appeals Committee to maintain their status in the Competition.

Mankranso SHS has also lost its qualification status to Bodwesango SHS after failing to appear before the Appeals Committee. Now Bodwesango has gained a qualification to the Final tournament.

Tepa SHS will be among the 32 schools that will compete for the 2019 edition for the first time since 2009. They lodged a protest against the 2013 4th place school, Manso Adubia SHS after losing their case on technical grounds last week. They filed an appeal and have been declared winners against Manso Adubia.

The date for the tournament is still undisclosed

Note:Two Schools will compete for the final slot before the commencement of the tournament. Those two schools are part of the full list