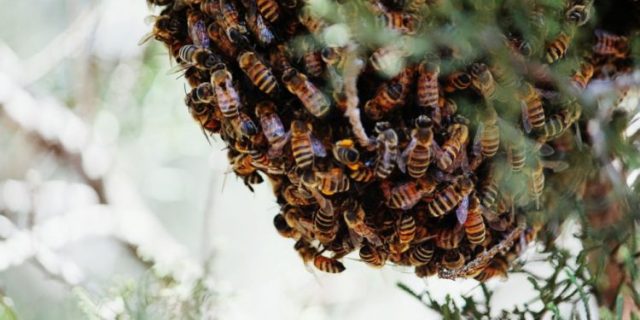 A swarm of violent bees on Wednesday disrupted a ceremony to hand over the Asokore Community Center to a contractor for rehabilitation and convert it into a two-storey- town hall Office Complex facility.

The program which was being attended by the Member of Parliament for New Juaben North, Nana Adjei Boateng also a Deputy Local Government Minister, the Municipal Chief Executive -Comfort Asante, Chiefs and few other persons ended abruptly.

The bees thronged the event ground from a beehive in the ceiling of one of the rooms at the Community Center, and suddenly launched an attack on the participants who begun running helter-skelter for safety.

Check This Out :  Boy locked indoors for 20 years due to medical condition

The MP and the MCE took to their heels into their vehicles while Nananom staggered in their traditional clothes for safety.

The daring bees followed them while they run away to the roadside.

The multiple sting of the bees on four persons have left them hospitalized at the St. Joseph Hospital in Koforidua.

The MP and MCE, however, escaped unhurt.

According to residents living around the facility, this is not the first time the bees have attacked and disrupted a ceremony.

Check This Out :  JHS 1 Pupil Goes Missing At Damango

“This is not the first time this has happened. They beat mourners, wedding guests among others. They have their hive inside the place”.

While filing the story, the community centre was being fumigated.