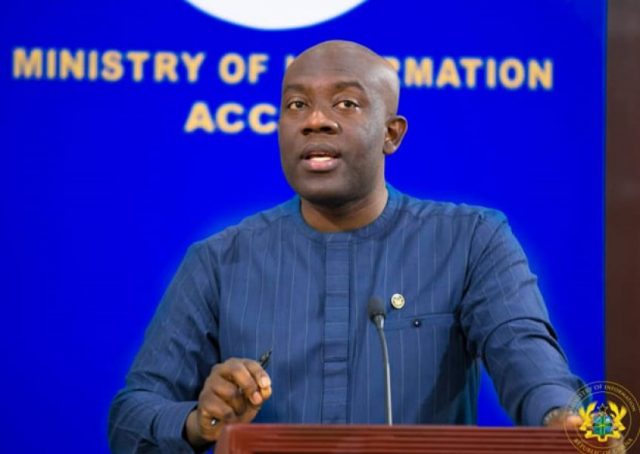 Information Minister Kojo Oppong Nkrumah has discounted claims that schools are being used as Covid-19 isolation centres across the country.

According to him, Senior High Schools were initially considered to be used for the said purpose but other facilities including hotels have worked.

”As part of the initial preparation, all districts were asked to identify places that can be used as isolation centres but that has not happened,” he said during an interview on Prime Morning Show on Joy Prime.

The United Nations Children’s Fund (UNICEF) in its guidelines for Covid-19 prevention and control in schools, among other things asked school authorities to guarantee schools are not used as shelters, treatment units. etc.

It further proposes the cancellation of any community events or meetings that usually take place on school premises, based on risk.

But the Information Minister indicated that the recommendations need not to be taken wholly but must be contextualised on country bases.

”The fact that we see some recommendations on a global stage does not necessarily mean that it got to be taken hook, line and sinker.

“It needs to be examined in the context of a particular country and a decision made” he said.

In April this year, Teachers of St. Augustine’s College and some residents of Cape Coast in the Central Region kicked against the idea of making the school an isolation centre.

Effutu residents also agitated and vehemently protested against the Ghana Health Service’s decision to use the Effutu Senior High School as a holding centre for people infected with Covid-19.

Government has already begun a stakeholder-engagement on a possible reopening of schools once restrictions on mass gatherings are lifted.

Deputy Health Minister, Dr. Bernard Okoe-Boye also revealed guidelines for resumption of schools will be ready by the end of May.

Kojo Oppong Nkrumah who doubles as the Member of Parliament for Ofoase-Ayirebi said a good number of schools across the country have been disinfected and that the government through the Ghana Education Service will regularly disinfect these institutions if they are to be opened.