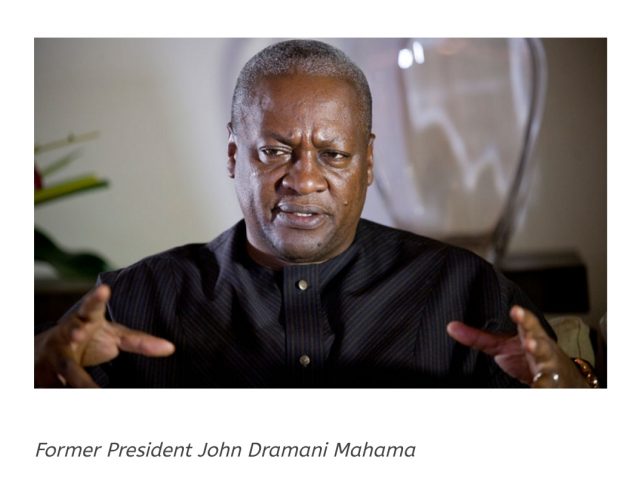 Former President John Dramani Mahama says until his party calls a meeting of the Council of Elders and the National Executive Committee (NEC), he cannot name his running mate.

“Our constitution states that I must announce my running mate in consultation with these two bodies,” he said.

“Unfortunately, because of the restriction on mass gathering, it was not possible for us to bring the members of our National Executive Committee from all over the country to implement that consultation.”

He assured that “now that the way has been cleared, you will be hearing the name of my running mate soon”.

The former president made this known to a questioner during a Facebook Live interaction on Thursday, June 18.

The questioner had suggested Professor Stephen Kwaku Asare to Mr Mahama, who is expected to name his partner for the December 7 elections in the coming days.

Extolling the qualities of the legal luminary, Mr Mahama disclosed his love for the law professor and his opinion writings but indicated: “I don’t know if he wants to be a running mate.”

Opponents of the National Democratic Congress  (NDC) have said Mr Mahama is finding it difficult to get a running mate.

They claim most of the known members of the NDC have declined the offer.

In the past two elections, the former president was partnered by Paa Kwesi Bekoe Amissah-Arthur, who died suddenly on June 29, 2018 at the 37 Military Hospital.

Mr Mahama assured that immediately the party convenes that all-important NEC and Council of Elders meeting, he will attend with the name of the person he has chosen as his running mate.

Meanwhile, he said the manifesto of the party is ready and will be launched in August.