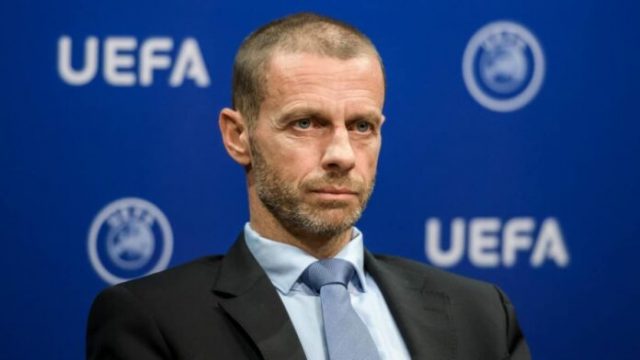 Liverpool will not be awarded the English Premier League title if COVID-19 forces the season to end prematurely, UEFA President, Aleksander Ceferin has confirmed.

The illness has caused an initial suspension of fixtures until April 4 with the Reds 25 points clear but most experts predict worse is to come, so there is doubt about whether the season can be completed.

There has been plenty of speculations around how to finish the campaign if no more matches can be played.

Some have argued for Liverpool to be awarded the title as it is almost inevitable that they would have gone on to claim the first Premier League crown in the club’s history.

Ceferin said: ‘I’ve seen and heard some fake news that UEFA will advise leagues to finish the championships now and decide that the winners are the ones who are number one now.

“I can say that it’s not true. Our goal is to finish the leagues and we didn’t recommend anything like that to any association or league,” stressed Ceferin yesterday.

Liverpool have been champions elect for some time now and only need two more victories to cement the title, even if Manchester City win all their remaining matches.

But it seems awarding the crown prematurely is not an option anywhere in Europe.

Barcelona are leading the LaLiga title race but Spanish federation President Luis Rubiales said: “I cannot guarantee that the competition will end, as others have risked saying, before June 30.

“It is unfair that the competition ends with the classification as it is now.”

With Euro 2020 postponed until next year, there is time in the summer to complete matches if the coronvirus situation is deemed acceptable to return to football.

If the season is declared null and void there could be myriad legal issues and Liverpool fans will be desperately hoping there is time to complete the remaining fixtures.

Premier League clubs face a staggering £750million fine from Sky Sports and BT Sport if the season comes to an end early over the coronavirus pandemic.

The top-tier clubs could enter an ugly battle with the broadcasting giants for a potential breach of their contract.

According to reports. the Premier League signed deals with Sky Sports and BT Sport that commit to delivering a completed fixture programme by July 31.

However, that may now not be possible with the season suspended until April 4 due to the outbreak of coronavirus.

On Tuesday it was announced Euro 2020 was being pushed back a year and will now be played in June and July of 2021.

That should open up the summer to allow the Premier League season to be finished during the months the European Championship was due to be played.

And clubs may well need those summer months too, with the league at risk of being slapped with a hefty fine should the season either be cancelled or run over into August.

As part of the TV rights package – worth £3billion over three seasons – Sky Sports were awarded 128 games, while BT Sport have 52.

Should the broadcasters not reach those tallies, the Premier League and its clubs would be considered as being in breach of their contracts.

As of now, Sky and BT don’t appear to have kicked off legal discussions.

But the Daily Mail claim Premier League clubs would not take any action lightly – and are already planning their defensive case.

And chairmen are not willing to shell out such huge sums due to circumstances outside of their control.

Sky Sports and BT Sport could decide to let it slide, however – with the former already informing customers they will be allowed to pause their subscriptions.

After all, the current TV rights deal ends in 2022 and the broadcasters are fully aware they face more competition in two years’ time, with the likes of online streamers, such as Amazon Prime, set to battle it out for more games.

That could also allow the Saturday 3pm games blackout to be finally lifted.