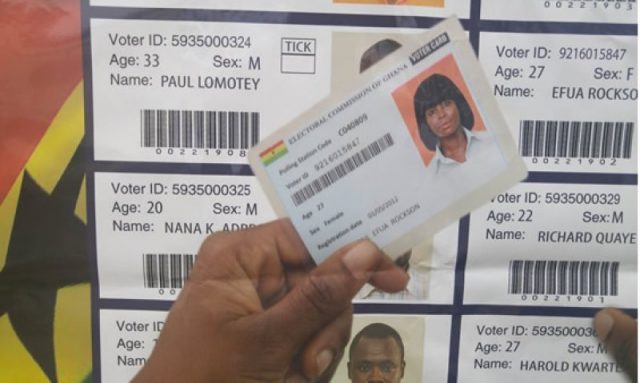 The Electoral Commission (EC) has in a 31-page written legal argument urged the apex court to back its decision to exclude the current voters’ identification card as proof of identification for prospective voters.

The Commission argued that the existing voters ID card was acquired by some Ghanaians in a manner that breached various laws.

The EC in its legal arguments described the card as a fruit of a “poisoned tree.”

According to the election body, a new process excluding the card will afford it an opportunity to “break from the past and remedy all the carried on ineligibilities”.

The Supreme Court on June 4, gave the EC up until June 8, to justify its stance on its refusal to use the card. The Commission has complied raising six legal issues in 31 pages to attempt to get the court to agree with it.

The Commission says the existing voter register which was compiled in 2012 and revised since by limited exercises has been held by the apex court as not being reasonably credible.

It argued that the two cases raised questions about existing voters register and using the National Health Insurance card to get on the register was contrary to law.

The Commission says this means “the credibility of the register compiled pursuant to C.I. remains in doubt save the registrations done with the voter identification cards before the coming into effect of C.I. 72”.

The commission then says this decision raises the presumption of credibility in Favour of the voter cards issued before C.I.72.

It, however, says the registration law used prior to C.I 72 had no identification requirement.

It says the law required no proof of citizenship and no proof of age. “…the grand parenting” of voters identification procured under C.I 12 can never be remedied”, the commission adds.