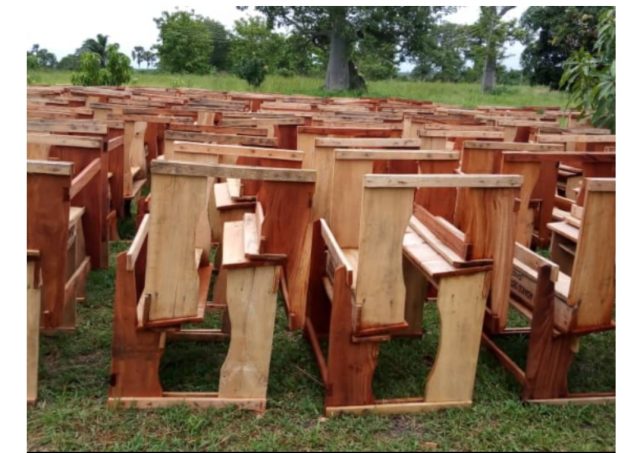 Some schools in the Adaklu District in the Volta Region have received a total number 508 dual desks to help deliver education in the district.

The dual desks were funded through an investment grant worth ¢127,079 that the Adaklu District Assembly received.

The grant is designed to be invested into sectors such as Education, Health, Sanitation, and Security for the enhancement of the socio-economic livelihood of the community.

The desks were presented by the District Chief Executive, Phanuel Donkor Kadey to the education directorate for onward distribution to selected schools within Adaklu District.

The DCE said that education is one of government’s topmost priorities and the Assembly chose to stay in line with the government’s agenda on education by investing in it for the district.

He added that the 508 desks which would seat 1016 pupils is just “the first step in addressing the over 5000-furniture deficit in schools.”

He hinted that another batch of 600 dual desks would be provided by October, 2020 beside mono desks and kindergarten furniture which have all been planned for.

Mr. Kadey indicated he was glad that a lot of effort was being made to improve education delivery particularly in the area of infrastructure.

Receiving the items on behalf of the Education Directorate and schools, the District Director of Education, Mr. Francis Yao Agbemadi was grateful for the immense and continuous support the directorate is receiving from the Assembly.

He said furniture plays an important role in effective teaching and learning at schools.

According to the District Education Director, the desks would be immediately distributed to selected eleven schools.

In addiion, he said that the directorate would work with heads of the receiving schools to ensure that the furniture is well maintained.

The supply of 508 dual desks to schools becomes one of the many other projects which are ongoing within the district.