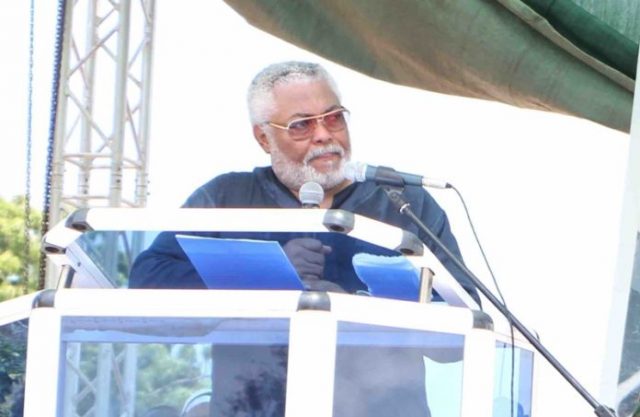 Former President Jerry John Rawlings has maintained that the current Vice-Chancellor (CV) of the University of Education, Winneba is under investigation for alleged involvement in financial malfeasance and procurement breaches.

A statement issued from the office of the former president and signed by Director of Communication, Mr Kobina Andoh Amoakwa said the office is privy to some allegations and subsequent petitions submitted by the former acting Finance Officer of UEW, Mr Bruno Chirani to the Governing Council of UEW and three investigative State Agencies for investigation.

The agencies include Economic and Organised Crime Office (EOCO), Auditor General and the Office of the Special Prosecutor.

According to the statement, some of these agencies have commenced their investigation which rightly informed Mr Rawlings’ request for the VC to step aside for fairness to prevail as previously the case with others in similar circumstances.

“We are also aware that at least the Auditor General and EOCO are at work on these allegations and have either visited the University or invited some of the officers to their offices, in pursuance of their investigations,” the statement said.

In 2017, a Winneba High Court ordered Professor Mawutor Avoke, a former VC of UEW to step aside pending the determination of a case of alleged financial malfeasance and procurement breaches brought before the court by the Governing Council of UEW.

Following these developments, the investigation by EOCO into the allegations against Professor Avoke and some other staff of the university were found to have no merits.

Mr Rawlings in his speech at the 38th celebrations of the December 31 Revolution at Winneba Tuesday, 2019 waded into the controversy by calling on the Governing Council to ask the current VC to step aside while the investigation into allegations against him continue.

But the University, in a statement deemed the comments “as unfortunate and a complete distortion of facts arising out of misinformation and/or a loss of touch with the developments at UEW over the last two years.”

The University added that Rev. Father Afful-Broni is not under any “form of investigation and no prima facie case of wrongdoing or misconduct has been established against him.”

The office of the former president has also replied the University saying “it is absolutely untrue and disingenuous to state that the current Vice-Chancellor, Prof Anthony Afful-Broni is not under any form of investigation.”

The statement from the office of the former president further dared the university to also publish the EOCO report that followed a probe into the matter.

“Former President Rawlings does not support any party in this issue. He is however very concerned with the entrenched positions taken by those at the helm of affairs at the University and their failure to appreciate the harm to not only the University, but also the global recognition of our educational institutions as well as the quality education of our wards at the university.

“We dare the University to do the following: