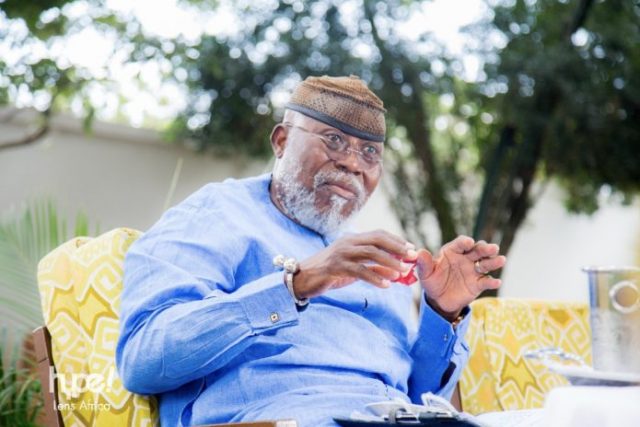 Dr Nyaho Nyaho-Tamakloe has berated the Akufo-Addo administration describing it as autocratic and dictatorial.

In a statement, the NPP founding member said: “There is no doubt that there is political tension in the country”, adding: “Autocracy and dictatorship appear to be rearing [their] heads in our body polity”.

He noted: “As a founding member of the New Patriotic Party, a party whose philosophy is underpinned by democratic principles, I am deeply worried [about] what is happening in our dear country.

“The true character of the President, as a human rights lawyer, must be brought to the fore to address these negative issues that continue to haunt the good conscience of the people of Ghana”, warning: “If care is not taken, a chaotic situation with attendant anarchy can occur”.

Details of the statement

Plato once said that: “The price good men pay for indifference on public affairs is to be ruled by evil men”. My candid views, as a senior citizen, on national issues and recent developments in the country have been well-articulated through many interviews in the media.

There is no doubt that there is political tension in the country; autocracy and dictatorship appear to be rearing its head in our body polity. As a founding member of the New Patriotic Party, a party whose philosophy is underpinned by democratic principles, I am deeply worried for what is happening in our dear country.

Some worrying incidents, before and since the assumption of office by President Akufo-Addo in 2017, are worthy of special note.

1.     The removal from office of the NPP Chairman – Paul Afoko, Vice Chairman – Sammy Crabbe and General Secretary – Kwabena Agyepong and suspension of other leading members including my good self through unconstitutional means under trumped-up charges.

2.     It would be recalled that ASP Nanka Bruce was assaulted at the Jubilee House in January 2017 soon after President Akufo-Addo took office.  Although those responsible were seen on tape, no action has been taken to punish them.

3.     Removal of Charlotte Osei and her two deputies from the Electoral Commission.

4.     Suspension of the CEO of the Public Procurement Authority in August 2019 following allegations of sale of contracts and subsequent referral of the case to CHRAJ.  Nothing has happened since then.

5.     The killing of Ahmed Hussein-Suale by an unknown assailant on 16th January 2019.  To date, no one has been apprehended.

6.     Ayawaso Wuogon by-election held on 31st January 2019 was characterised by violence; no action has been taken on the recommendations of the Commission of Enquiry.

7.     The unsolved mystery of the three kidnapped Takoradi girls.

8.     Threats to press freedom: Closing down of radio stations, invitation of journalist who did a video recording predicting what the President would say in 31st May broadcast.

9.     The Minister of Communications, Ursula Owusu-Ekuful, was reported to have stated on radio that: “Ya gye yen man”, yet there is shocking silence of officialdom on this potentially divisive and ethnically provocative statement.

10. Hurling of insults by leading party functionaries at political opponents and beating of war drums indicating clearly lack of tolerance and leadership in our democracy.

11. The numerous reported cases of corruption with no action by the government.  A January 2020 U.S. News & World Report on “The 10 Most Corrupt Countries, Ranked By Perception” ranked Ghana as the No. 1 most corrupt country in Africa and No. 3 in the whole world.  The government has not demonstrated commitment to prosecute its officials.

12. The ongoing saga on compilation of a new voters’ register and the political tension it has created cannot be ignored.  The insistence of the Electoral Commission (EC) to use passport and NIA card as the only documented proof of citizenship has been met with protests and concerns leading to the present case before the Supreme Court.  Dialogue and consensus building among all the major political actors have taken backstage contrary to the ECOWAS Protocol, which is binding on member countries.  Advice from many identifiable bodies such as the National House of Chiefs, CSOs and lately the Chief Priest of Nungua, Nii Borketey Larweh Tsuru, to the EC for dialogue has been ignored.  The apparent aloofness of government in this matter that can derail the gains of our democracy, is worrying.

13. Action by the Police: Invitation by the Police of persons who make public statements that can be described as useful wakeup calls on pertinent matters of national interest.  Note recent invitation of Boakye Gyan, Bernard Mornah by the CID.

In previous media interviews, I alluded to these events and inaction by the government of President Akufo-Addo pointing out the dangers they pose to our cherished peace and freedom.  It appears these admonitions have fallen on deaf ears.  These are matters of grave concern.  I, therefore, wish to bring to the attention of the President what Abraham Lincoln said. That is: “Nearly, all men can stand adversity, but if you want to test a man’s character, give him power.”

The true character of the President, as a human rights lawyer, must be brought to the fore to address these negative issues that continue to haunt the good conscience of the people of Ghana.  If care is not taken, a chaotic situation with attendant anarchy can occur.

A word to the wise is enough!!