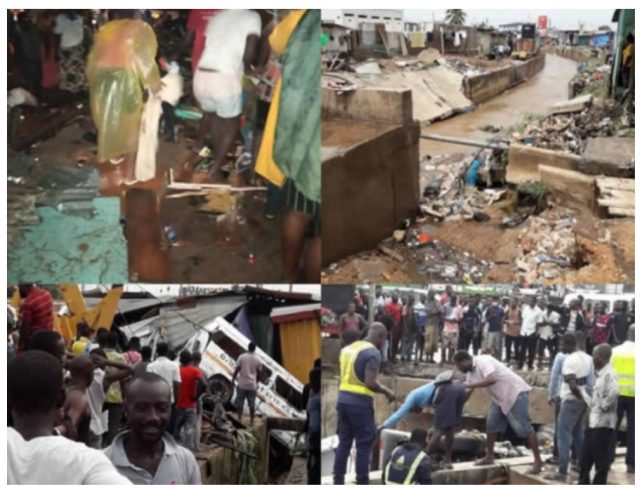 Five persons, including a baby, lost their lives in the Okaikoi North Constituency, a downpour four-hour in the early hours of Tuesday.

About 300 people have also been displaced, property estimated at thousands of cedis have been lost.

The bodies of the deceased have been deposited at the Achimota Hospital and Lapaz Community Hospital morgues.

The Member of Parliament (MP) for the area, Fuseini Issah told the Ghana News Agency in an interview that the blocking of waterways by squatters and the disposal of refuse into drains could be blamed for the floods.

He said it was time residents became responsible and helped the authorities checked those who were recalcitrant to bring sanity to the community.

To prevent the recurrence of the tragedy, Mr Issah said the public must desist from throwing garbage into drains and avoid building on waterways to allow the free flow of water.

Mr Mahmud Osman, the Assemblyman for the Akweteman Electoral Area, said most houses in the area, especially those within the low lying settlements, were flooded.

Check This Out :  Ato Essien to refund Gh¢27.5million

He was, therefore, coordinating with the Municipal Chief Executive and the MP to see how best to support the victims.

“It is unfortunate how a number of squatters have found their way into this area, he said, adding that the Assembly would meet on the issue to find an amicable solution.

The GNA observed victims of the floods searching through the ruins to see what they could salvage.

Most of the kiosks inhabited by squatters were washed away leaving the inhabitants with just the clothes they had on and their mobile phones.

They have, therefore, appealed to the authorities to go to their aid.

A sprinter bus was also carried by the floods but it got lodged in a big drain, and was later pulled out by a team of police and officials from the National Disaster Management Organisation.

Check This Out :  Pastor who threatened Akufo-Addo, EC Boss remanded

A driver’s mate, Kwame Effah, who was sleeping in the bus, expressed gratitude to God, amidst tears for saving his life.

He explained that he was able to jump out the moment he realised the bus was sinking as the concrete slab on the bridge on which it had parked caved in.

Ms Denise Sagoe- Brock, a resident, said she came out around 2:00 PM to realise the water was almost at her doorstep and about to enter her room.

“I rushed inside and I was able to gather all important documents and gadgets onto my bed, after which I stood on the bed clutching some of the things.”

Madam Esther Nartey, another resident, said she and her family had to run to higher grounds for safety.

“I carried my eight month-old baby at my back and carried my five-year old daughter on the shoulder, while my husband carried my ailing mother as we struggled to find a safe ground. I thank God for saving us. To Him we’re most grateful,” she said.