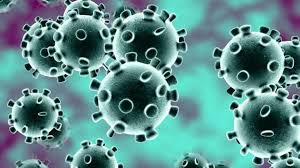 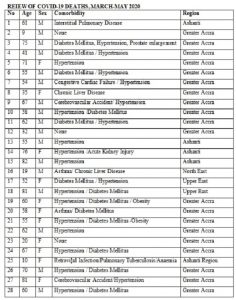 Details of the 28 persons who have so far lost their lives in the fight against the coronavirus pandemic have finally been released.

The list which is included in the latest update on the Ghana Health Service site, provides the underlying health condition responsible for the death of the 28.

Though the list doesn’t mention the names of the victims, their ages and gender are provided.

Majority of the people who have lost their lives in the battle, according to the list, died from Hypertension and Diabetes Mellitus.

Three persons on the list, however, died without any underlying health condition.

It is however not clear if the list is in order of time of deaths.

12 persons on the list representing 43% of the total deaths were above 60 years of age, persons who were from ages 30 to 60 years were 12 in number, representing another 43%.

The remaining 4 victims which make up 14% of the total number were below age 30 at the time of their death.